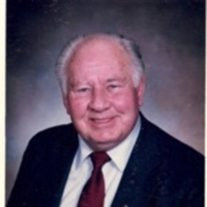 William C. Wunderlich Age 92. Passed away peacefully Monday, July 15, 2013 at his home. Born February 17, 1921, in Joliet, IL; he was the son of the late William C. and Minnie A. (nee Faust) Wunderlich. Preceded in death by the mother of his children and first wife Phyllis J. (nee Banker) Wunderlich and his second wife, Betty J. (nee Edwards) Wunderlich; and his brother Ernest W. Wunderlich. He was a graduate of Joliet Central High School (graduated 1941), and he attended Joliet Junior College and Indiana University. A proud veteran, Bill served on an LST in the U.S. Navy during World War II in the Pacific theatre. As a young man, Bill learned and adopted the 17 Principles of Success through his work with Napoleon Hill and W. Clement Stone as an insurance agent. In the twelve years to follow, Bill worked as an insurance agent with the Northwestern Mutual Life Insurance Company. Bill then developed an interest in the travel agency business, and he opened Wunderlich Travel Agency on Jefferson St. in Joliet in 1963. After a long and successful career traveling the world as a Certified Travel Consultant, Bill retired to his home in Minooka to spend more time with family, friends, and his favorite acreage on the Aux Sable Creek. Throughout his working career and into his retirement, Bill was an active member of the community. In 1985 he served as President of the Joliet Rotary Club, and was a parishioner of St. Mary's Catholic Church in Minooka. Survived by his children, The Rev. Beth W. Hixon of Philadelphia, PA; W. Jeff Wunderlich of Minooka, IL; Mark A Wunderlich of Minooka, IL; Dian K. Delehanty of Delray Beach, FL; and Nancy J. Wunderlich of Boulder, CO; stepchildren Mary Lou Edwards of Palm Harbor, FL and Steve C. Edwards of Naples, Italy; five grandchildren, Monica and Melissa Wunderlich, T. Cole Delehanty, Victoria Hixon-Hayes, Henry Edwards and five great-grandchildren; Brianna, Tyler & Mya Hixon, Zachary and Ryan Hayes. Bill's family would like to thank his doctors and nurses and those affiliated with the V.A. and Joliet Hospice, who have been by his side through recent years' health challenges. Visitation with family and friends will be held at The Maple Funeral Home, 24300 W. Ford Rd., Channahon, IL 60410 on Tuesday, July 30, 2013 from 4:00 to 8:00 PM. On Wednesday, July 31, 2013 please meet directly at St. Mary's Catholic Church, 303 W. St. Mary's St., Minooka, IL for Mass of Christian Burial for William C. Wunderlich at 10:00 AM. Interment will follow at Elmhurst Cemetery, 1212 E. Washington St., Joliet, IL. Gifts in Bill's memory will be welcomed by St. Mary's Catholic Church (Building Fund) or Joliet Area Community Hospice, 250 Water Stone Circle, Joliet IL, 60431. For information 815. 467-1234 or www.themaplefuneralhome.com

William C. Wunderlich Age 92. Passed away peacefully Monday, July 15, 2013 at his home. Born February 17, 1921, in Joliet, IL; he was the son of the late William C. and Minnie A. (nee Faust) Wunderlich. Preceded in death by the mother of... View Obituary & Service Information

The family of William C. Wunderlich created this Life Tributes page to make it easy to share your memories.

Send flowers to the Wunderlich family.