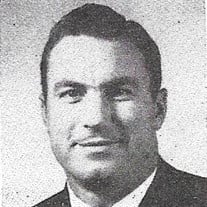 Roy A. Todd "Babe" Roy A. Todd "Babe" was born the son of the late LeRoy and Cecil E. (nee Hancock) Todd on October 7, 1931, in Joliet, IL and passed away peacefully surrounded by his family on June 16, 2014, at the Joliet Area Community Hospice Home at the age of 82 years. He was united in marriage to Patricia Breen at St. Mary's Catholic Church of Minooka on the 5th day of April, 1952. Beloved husband of 62 years to Patricia; cherished father of Kathleen Ewing, Sandra Canupp, Mary Stava and her husband Joe and Susanne Todd; proud grandfather of Roy Ewing and his wife Tami, Jessica Canupp, Lindsay Canupp-Kleist and her husband Chris, Spencer Sullivan and great grandfather of Amelia Ewing. Fond brother of Barbara (the late Dale) Thompson, Maxine (Dave) Gilkerson, Penny (Mike) Hrechko and Cindy (Terry) Davis, numerous nieces and nephews also cherish his memory, with special recognition and appreciation to Butch (the late Diane) Sanders for his unending kindness. Roy was preceded in death by his parents; two sons, Terrence and Tracy Todd; two brothers, Wesley and Leslie "Buster" Todd and two sisters, Shirley (the late Mickey) Sanders and Merry Faye Todd. A distinguished Veteran of the United States Marine Corps, proudly serving his country during the Korean Conflict. Following his Honorable Discharge from his military duties, Babe made his life and home in Channahon, IL. He was the owner of R.A. Todd & Sons, Inc., he served one term as Channahon Road Commissioner, was a member of the Channahon Civic Club and a 30 year board member of Channahon School District 17. He was an avid Cubs fan, lover of country music, an enthusiast of travel and will be fondly remembered for his great sense of humor. But above all, he was a devoted family man with unwavering integrity and honor. Family will receive friends at St. Ann Catholic Church, Channahon located at 24500 S. Navajo Drive on Friday, June 20, 2014 from 9:00 AM until Memorial Mass Begins at 10:00 AM. In lieu of flowers, lasting memorials may be directed to the Joliet Area Community Hospice Home. Arrangements entrusted to The Maple Funeral Home, Channahon. For information www.themaplefuneralhome.com

Roy A. Todd "Babe" Roy A. Todd "Babe" was born the son of the late LeRoy and Cecil E. (nee Hancock) Todd on October 7, 1931, in Joliet, IL and passed away peacefully surrounded by his family on June 16, 2014, at the Joliet Area Community Hospice... View Obituary & Service Information

The family of Roy A. Todd created this Life Tributes page to make it easy to share your memories.

Send flowers to the Todd family.