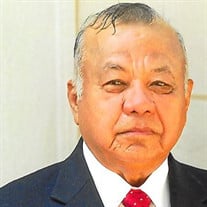 Raymundo R. Luna Age 81, US Army Vietnam War Veteran, went to be with the Lord June 2, 2015, at Morris Hospital. Raymundo is survived by his beloved wife of 53 years, Joan K. Luna; proud father of Raymundo Luna, Kirk (Holly) Luna, Timothy Luna and Jennifer (Phil) Harvey; loving grandfather of Thomas and Rangel Luna and Erika, Cameron and Ryan Harvey; dear brother of Jesus (the late Margarita) Luna, Severiano (Beatrice) Luna, Soledad (the late Ramon) Rodriguez, and Felipa (the late Aurelio) Garcia. Numerous nieces and nephews also survive. Preceded in death by his parents, Felix and Francisca Luna of San Antonio, TX; two brothers, Felix, Jr. and Cecilio Luna and two sisters, Isidra Sanchez and Maria Rodriguez. In May 1957 Raymundo graduated from the ROTC program at St. Mary’s University in San Antonio, Texas and was commissioned a second lieutenant of the field artillery in the United States Army. Serving his beloved country proudly for 20 years he retired as a Lieutenant Colonel in 1979. LTC Raymundo R. Luna was awarded two Bronze Stars after completing two tours of duty in Vietnam 1965 - 1966 with the 1st Infantry Division (Big Red One) and 1971-1972 with the 54th General Support Group. Other medals and commendations include Parachutist Badge, Air Medal, Meritorious Service Medal and the Vietnam Cross of Gallantry. After Colonel Luna retired he spent time as an Equal Opportunity Specialist with a Federal Government Agency in Chicago. Then was hired by the US Army Corps of Engineers as an Equal Opportunity Officer, and in 1985 became a lawyer after passing the Illinois State Bar Exam. Raymundo later joined the Illinois Department of Human Rights as Staff Attorney, climbing to the position of Chief Legal Counsel for a period of eight years and retiring in 2011 at the age of 78. Having been deeply devoted to his family, his faith and his country Raymundo will be remembered as a loving husband, father, grandfather as well as a loyal friend and neighbor. He will truly be missed by his family and the community in which he lived. Funeral Service for Raymundo R. Luna will be held on Monday, June 8, 2015 at 12:30 PM at The Maple Funeral Home located at 24300 W. Ford Rd., Channahon. Father Tuan Van Nguyen officiating. Interment Abraham Lincoln National Cemetery, Elwood. Visitation Sunday from 4:00 to 7:00 PM. For information www.themaplefuneralhome.com

The family of Raymundo R. Luna created this Life Tributes page to make it easy to share your memories.

Send flowers to the Luna family.