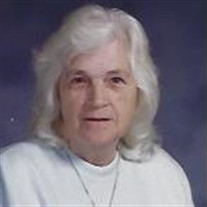 Ramona "Mona" Lee Adler (nee Calhoun) 86, of Braidwood, IL, passed away peacefully on June 4, 2021 at her home surrounded by her family. Mona was born on September 30, 1934, to Lloyd "PeeWee" Raymond Calhoun and Harriett Faye Adler (nee Janes) in Mattoon, IL. She met the love of her life, Wilbert "Red" Marion Adler, in Posen, IL, at her father's business "PeeWee's Dixie Inn", and they wed on February 14, 1953, they raised their four children, Eileen, James, Emma and Marian in Markham, IL and later moved to Braidwood, IL where Mona was a resident for the past 33 years. Mona and Red were happily married for 37 years. Mona loved all things Baseball/Softball and was an avid White Sox fan. She played for many years when she was younger and along side her children when they grew older. She also loved to dance, there wasn't a moment when music was playing that she wasn't dancing, especially the "Polka". She told everyone when she was younger that all she wanted to be was a professional clown because she loved to make people smile and laugh. After the death of her husband, Mona worked as a custodian for the Reed-Custer School District, where she made life-long friends and helped create a clean and safe environment for the staff and children. Mona enjoyed traveling with her husband, and later her children, and there wasn't a place she would travel to where she wouldn't run into someone she knew. Mona's life was filled with love and compassion for her children, grand-children and great grand-children along with so many other kids who fondly knew and called her "Granny". Mona always had a table full of family and friends, playing dice, cards or dirty marbles. There was never enough room at one table because everyone wanted to play. Mona is preceded in death by her parents, her brothers; Kenneth Calhoun and Lloyd "Sonny" Calhoun Jr., and her sister; Mary Josephine "Jo" Rouse and her beloved husband, Wilbert "Red" Adler. She is survived by her brother, Donald Calhoun; her children; Eileen Kardelis, James (Cindy) Adler, Emma (Gary) Wallerich and Marian (Darrell) Barnard; her thirteen grandchildren; Christy, Robert, Jackie, Michelle, Ronald, Nikki, Ryan, James Jr., Bridget, Michael, Matthew, Anthony, Cristyn; and her twenty eight great-grandchildren; Bryce, Josh, Victoria, Ashlyn, Kaytlyn, Johnathan, Jackson, Trenton, Kyrstan, Kaaden, Finnley, Giddeon, Corissa, Dean, Jack, Brody, Maci, Michael, Evan, Madelyn, Alex, Addison, Aubrey, Aryana, Ava, Zachary, Bradley and Daizy. Visitation for Romana Lee Adler will be held on Wednesday, June 9, 2021 from 10:00 AM until 1:00 PM at Maple Funeral Home located at 24300 W. Ford Rd, Channahon. IL to Trinity Lutheran Cemetery located at 6800 W. 159th Street, Tinley Park, IL where she will be laid to rest with her beloved husband "Red" with a Graveside Service at 2:00. Pastor Paul Strand officiating. For information 815. 467-1234

The family of Ramona "Mona" Lee Adler created this Life Tributes page to make it easy to share your memories.

Send flowers to the Adler family.