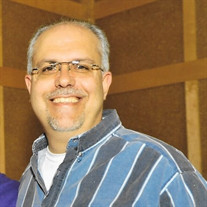 Paul W. Lentz Paul W. Lentz was born the son of the late Roger and Vicki (Zabilka) Lentz on August 20, 1960, in Elgin, IL and departed this life August 4, 2014, at his home in Channahon, IL following a courageous two year battle with cancer at the age of 53 years. Paul was united in marriage on July 24, 1982, to Tina Steingraber. To this blessed union one son was born, Daniel Lentz. Paul is survived by his wife, Tina Lentz, his son Daniel Lentz; his mother in law, Gerry (the late Pat) Steingraber; cousins, Sharon, Bobby, Larry, Tony and Freddie; sisters in law, Jan (the late Pat) Lentz, Kim (Chris) Schuerg and Rose (the late Dave) Lentz; brothers in law, Paul (Debbie) Steingraber and Tim Steingraber as well as a host of nieces, nephews and many cherished friends. Preceded in death by his parents; two brothers, Pat and Dave and father in law, Allen Steingraber. Paul formerly resided in Oregon IL and Dundee, IL. He was most recently employed as Engineer Manager at Joliet Caterpillar Plant. A distinguished Veteran of the US Air Force, Paul proudly served his country as well as his community, acting as Police Commissioner for the Channahon Police Department for many years and was a parishioner of Three Rivers Evangelical Free Church in Plainfield. Having been deeply devoted to his family, Paul will be remembered as a loving husband and father as well as a loyal friend and neighbor. He will truly be missed by his family and the community in which he lived. Paul W. Lentz will be lying in state on Saturday, August 9, 2014 from 10:00 AM until services begin at 11:00 AM at Three Rivers Church located at 23901 W Rolf Rd., Plainfield. Pastor Clement Walchshauser officiating. Graveside Service will be on Monday, August 11, 2014 at 11:30 AM at Evergreen Cemetery, Barrington, IL. For those wishing to leave lasting memorials the family asks that you please consider Joliet Area Community Hospice or Three Rivers Church. Visitation will be on Friday, August 8, 2014 from 2:00 to 8:00 PM at The Maple Funeral Home located at 24300 W. Ford Rd., Channahon. For information www.themaplefuneralhome.com

Paul W. Lentz Paul W. Lentz was born the son of the late Roger and Vicki (Zabilka) Lentz on August 20, 1960, in Elgin, IL and departed this life August 4, 2014, at his home in Channahon, IL following a courageous two year battle with cancer at... View Obituary & Service Information

The family of Paul W. Lentz created this Life Tributes page to make it easy to share your memories.

Send flowers to the Lentz family.