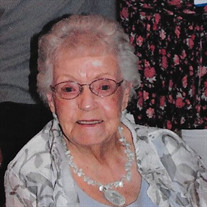 Marjorie E. Meade (nee Wilson) Mrs. Meade was born the daughter of Ethelbert F. and Sadie E. (nee Tapp) Wilson on June 7, 1917 in Tazewell County at the family home in Hopedale, Illinois and peacefully passed away on Saturday, June 21, 2014 at her late Channahon residence at the age of 97 years. Marjorie was a graduate of the Hopedale School System, she pursued her interest in teaching at the Illinois State Normal Teachers College and came to Minooka to begin her teaching career in 1939. As life unfolded, Marjorie met and later married Francis Warren Meade on October 2, 1943 at St. Mary's Catholic Church in Minooka. Together, they began their cattle and hog business on a 300 acre rented farm and later purchased their present farm home in 1952. With the beginning of her own family, she put her teaching career "on hold" and returned to teaching when the youngest of 6 children was enrolled in the Channahon School. Marjorie eventually retired from the Channahon School District in 1973. Yet she remained an active member of St. Ann Catholic Church, Channahon where she was an inspiring roll model-mentor to new church members who were converts through supportive ministry. In 1989 she and her good friends Rose Kreiger and Dorothy Kelly chartered the local area T.O.P.S. Club # 2280. Marjorie leaves to cherish her memory her son Thomas Meade and wife Carol of Morris, IL; and two daughters, Mary Webb and husband Ron of Joliet, IL; and Sister Gemma "Jane" Meade of Massachusetts also surviving is her son-in-law, Robert G. Schutter; 5 sisters and 2 brothers; 12 grandchildren, 25 great- grandchildren, 3 great great grandchildren as well as numerous nieces and nephews, and caregivers Cheryl Cottle and Helena Piazdecka. Preceded in death by her parents, her beloved husband Francis W. Meade (2006); one son, Father Francis "Frank" Meade (1990); two daughters, Stephanie Meade (2006) and Sheila Schutter (2006); and three grandsons, Robert P.Schutter (1972), John Meade (1978) and Scott Meade (1979), her three sisters and two brothers. Family will receive friends from 9:00 AM until Prayers begin at 10:15 AM on Thursday, June 26, 2014 at The Maple Funeral Home located at 24300 W. Ford Rd., Channahon to St. Ann Catholic Church for Mass of Christian Burial to be celebrated at 11:00 AM. Fr. Jeff Stoneberg officiating. Interment St. Mary's Cemetery, Minooka. Preferred Memorials may be directed to The Meade Family who will disburse those gifts among various charities according to Mrs. Meade's wishes. Visitation will be Wednesday, June 25, 2014 from 2:00 to 8:00 PM. For information www.themaplefuneralhome.com

The family of Marjorie Meade created this Life Tributes page to make it easy to share your memories.

Send flowers to the Meade family.