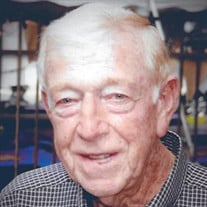 John R. Cotter Passed away peacefully on Friday, July 12, 2019 surrounded by his family at Amita Health St. Joseph Medical Center, Joliet At the age of 86 years. Born in Vidette, AR the son of the late Edward and Doxie (nee Shrable) Cotter. John was united in marriage on November 29, 1958, at United Methodist Church, Channahon, to Aileen Torkelson. He is survived by his wife of sixty years Aileen (nee Torkelson) Cotter; Cherished Father of Brenda E. (Rick) Cotter-VanAsdlen and Marsha A. Cotter-Simotes; Proud Grandfather of Jessica R. (the late Mark S.) VanAsdlen-Smith, Nicholas A. Simotes, Alex J. Simotes, Jonathan R.(Nicole nee Egizio) VanAsdlen and Jenna A. Simotes; Great Grandfather of Cora Rae Smith, Livia Grace Smith and soon to arrive Baby VanAsdlen; Dear Brother of Corene Cotter-Hodges of Kansas City, MO and Louise Cotter-Atkinson of Clever, MO Also left to mourn his passing are several nieces, nephews and many friends. Preceded in death by his parents; sisters, Mildred Cotter-Foresee and Treva Cotter-Barber; brother, Ransey Cotter and grandson, Mark S. Smith. John was a distinguished Veteran of the US Army. A long time resident of Channahon. He was the president, general manager and co-creator of Wadsworth Golf Construction Co. of Plainfield. John retired after 58 rewarding years of service, He was an integral part of more than 900 golf course projects across the United States. He was a member of the Channahon United Methodist Church and was chairman of the Finance Committee, donating his time and talents to the community and church. He served on the board of Channahon Park Foundation and the Minooka Community High School. He will be remembered as a devoted husband, father, grandfather, as well as a loyal friend. He will be truly missed by all. The Cotter Family would like to express their gratitude for all the kindness shown to John by the Doctors, Nurses and Staff at the Joliet Oncology-Hematology Associates, Ltd John R. Cotter will be lying in state on Friday, July 19, 2019 from 9:30 AM until services begin at 10:00 AM at the Channahon United Methodist Church located at 24751 W. Eames (Rt. 6) Pastor Gavin Brandt officiating. Interment Willard Grove Cemetery, Channahon. Memorial contributions may be sent to United Methodist Church, Channahon, the Channahon Fire Department, JOHA or the Mark S. Smith Scholarship Program. Visitation Thursday, July 18, 2019 from 2:00 to 7:00 PM at The Maple Funeral Home located at 24300 W. Ford Rd, Channahon. For information www.themaplefuneralhome.com

The family of John R. Cotter created this Life Tributes page to make it easy to share your memories.

Send flowers to the Cotter family.