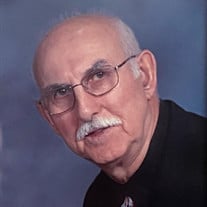 Jack Allen Hawkins Sr. February 8, 1935 - April 8, 2022 On April 8, the sun set on our father and God's faithful servant Jack Hawkins. He was the loving husband of Arlene for 55 years. He is survived by son Mark Hawkins (Craig Hall) and daughter Beth (David) Hawkins, daughter in law Lee Hawkins, grandchildren Aaron (Megan) Hawkins, Kevin Hawkins, Stephanie (Tony) Berg, Mark Sabourin (Cheryl Howe) and Alexia Hawkins, great grandchildren Anthony, Gregory and Bradley Berg and his brother Don (Sally) Hawkins as well as numerous family and friends. He is preceded in death by his wife Arlene and son Jack Hawkins Jr., father William Hawkins and mother Nora Dibbens Hawkins, sister Gladys Jeter and brothers William, David, Harry, James, Everett, Gene and Junior Hawkins. We will always be grateful for Frank and Ann Crickman and Don and Jackie Mckinney for bringing four beautiful children into our lives that our parents loved like grandchildren. Born in Lebanon, Missouri, he has been a resident of Channahon and a member of the Channahon United Methodist Church for more than 60 years. He was involved in coaching baseball and basketball with his sons and grandson. He was a scout leader for 12 years. He was a volunteer fireman for more than 25 years. He was a band booster parent, a youth group leader at his church and a member of the Illinois Walking Horse Association. He served in the Army in Panama guarding the canal zone. He worked for the Ford Motor Company for 42 years at the Chicago Heights Stamping Plant. A cowboy and a gardener, he always had a horse and loved to ride. His retirement years were spent joyfully on the back of his horse Sunnybird riding beside his son Mark. He spent many a night enjoying a game of cards with his wife Arlene, family and friends. Anyone who ever really knew Jack couldn't do anything but like him. We would like to extend a heartfelt Thank You to the staff at Rock Run Memory Care Center and the staff at Kindred Hospice. Thank you for the care and compassion you have shown in these final months. Jack A. Hawkins will be lying in state on Thursday, April 14, 2022 from 9:00 a.m. until Funeral Service begins at 10:00 a.m. at the Channahon United Methodist Church located at 24751 W. Eames (Rt. 6) Pastor Doh officiating. Interment Willard Grove Cemetery, Channahon. In lieu of flowers, do something kind to help someone in need. Jack was one of God's good helpers. As well, donations can be made for research regarding dementia to the Alzheimer's Society in memory of Jack and his son. Visitation Wednesday, April 13, 2022 from 3:00 to 7:00 p.m. at The Maple Funeral Home located at 24300 W. Ford Rd., Channahon. For information, please phone 815. 467-1234 or visit Jack's Memorial Tribute at www.themaplefuneralhome.com

Jack Allen Hawkins Sr. February 8, 1935 - April 8, 2022 On April 8, the sun set on our father and God's faithful servant Jack Hawkins. He was the loving husband of Arlene for 55 years. He is survived by son Mark Hawkins (Craig Hall) and daughter... View Obituary & Service Information

The family of Jack Allen Hawkins Sr. created this Life Tributes page to make it easy to share your memories.

Send flowers to the Hawkins family.