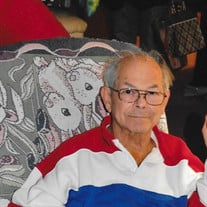 Gordon M. Smith Of Channahon, formerly of South Beloit, IL Passed away peacefully on Wednesday, September 2, 2015 at Foster G. McGaw Hospital, Proviso Township, IL. Born on September 18, 1937 in Winner, South Dakota to the late Bennett J. and Marie F. (nee Frickel) Smith. On November 27, 1959 Gordon was wed to Emma M. (nee Burrow), to this blessed union he was the loving father of four children; Douglas Smith and wife Kristina, Bradley Smith and wife Robin, Donald Smith and wife Sharon and Tina Wills. He was the proud grandfather of six; Jonathan and Hannah Smith, Brittany and Brandi Smith, Samantha Diaz and husband Jesse and Cody Wills, great grandfather of Antonio and Aria Diaz. Dear brother of Conrad (Joan) Smith, Kenneth (Jean) Smith, Fred (Janet) Smith and Marilyn Lenz and husband James Stroope. Numerous nieces, nephews and cousins also mourn his passing. Preceded in death by his parents. Gordon was a skilled welder and a member of Pipe Fitters’ Local Union 597. He had a talent for mechanics and enjoyed working on his own vehicles as well as generously helping a friend or neighbor getting their cars back in working order. He graduated from North Central Bible College and lived out his faith as a compassionate and caring man who truly enjoyed people. He was an accomplished musician and was gifted with being able to play the clarinet as if he had had years of training although he only had but a few professional lessons. Gordon was the owner and pilot of a Ercoupe Aircraft spending many hours in the sky. He had a desire for knowledge and read a myriad of books to satisfy his craving for understanding, comprehension and resourcefulness. Gordon M. Smith will be remembered as a loving husband, father, grandfather, brother, neighbor and friend. Memorial donations may be directed to Morning Star Mission or to the favorite charity of the donor. Funeral Service will be held on Tuesday, September 8, 2015 at 6:30 PM at The Maple Funeral Home located at 24300 W Ford Rd., Channahon. Cremation Rites will follow Services. Visitation also on Tuesday from 3:00 PM until Service begins. For information www.themaplefuneralhome.com

The family of Gordon M. Smith created this Life Tributes page to make it easy to share your memories.

Send flowers to the Smith family.