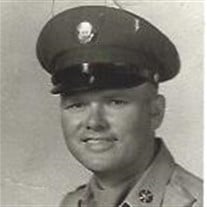 Gerald “Jerry” W. O’Brien July 20, 1939 – Feb 17, 2019 Gerald died unexpectedly on February 17th, 2020 due to complications of cancer. He was born on July 20, 1939 to Walter and Frances (Hexdall) O’Brien in Morris. He was educated in Morris schools. On March 7, 1958 he married Joyce Greenbeck. They spent their married life in Minooka, IL. Gerald got drafted to the Army in 1963. He did his basic training at Fort Leonard Wood in the Missouri Ozarks. He was then sent to Fort Bliss, Texas. He later was stationed at a missile base in Germany. Prior to and upon his return from the service Jerry worked at Kerr Glass Co. as a mechanic for several years. He drove a truck for various companies, retiring from Yellow Freight in 2005. He was affectionately known as Bridge Bender and Highway Hero over the cb waves. Jerry was very active in the community. He was a present member of the Minooka American Legion Post 1188 where he once served as Commander. He was also a past Commander of the Grundy County American Legion. He belonged to the Minooka United Methodist Church. He was a past member and president of the Minooka Volunteer Fire Department, and a past member of the Minooka Lions Club. Jerry always had a smile and a joke for everyone he saw. His favorite hobbies included fishing, and watching drag racing and old westerns. He had a passion for antique cars. He greatly enjoyed visiting with his afternoon Casey’s coffee friends. Any day spent with family was a great day for him. He loved to travel with Joyce any chance he got and also loved telling stories of their time in Germany during the service. Gerald is preceded in death by his parents, his daughter, Kelly O’Brien, his niece, Karyn Greenbeck , and nephew Guy Sassenger. His beautiful life will forever be cherished by those he left behind. His wife of 62 years, Joyce; children, Scott of Minooka, and Kristy (Brent) Pierce of Morris; grandchildren and loves of his life, Kailey Pierce of Minneapolis, MN and his best fishing buddy, Brendan Pierce of Morris; Siblings, Winston (Carol) O”Brien of Seneca and Bonnie (Ralph) Sassenger of Morris; Brother N Law, Wayne Greenbeck of Minooka; nieces Leah Greenbeck (Bruce Lund) of Joliet, Toni O’Brien (Emanuel Martinez) of Morris and Lori (Mike) Heinrich of Surprise, Arizona; Great Niece Evie Martinez and Great Nephew Nicholas Heinrich; Aunt Janice Armin and numerous cousins. Visitation will be held on Saturday, February 22nd from 9:30-1:00 at the Maple Funeral Home in Channahon, IL. A service will be held immediately following atThe Maple Funeral Home at 1:00, Pastor Sarah Hong Officiating with burial immediately following at Seward Mound Cemetery, In lieu of flowers, memorials can be sent to Christopher and Dana Reeve Foundation or Minooka United Methodist Church.

The family of Gerald W. O'Brien created this Life Tributes page to make it easy to share your memories.

Send flowers to the O'Brien family.