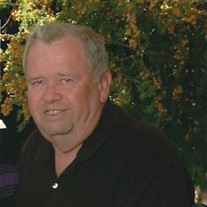 Gary John Thornton At Rest February 24, 2020. Born February 26, 1942. Beloved Husband of the late Linda Thornton (nee Swartz); Loving Father of Wendy (Richard) Anderson, Holly (Joel) Condra and Christopher (Shelley) Thornton; Proud Grandfather of Aric and Kelli Anderson, Mikayla (Tyler) Rogers, Dustin Condra and Bailey and Addison Thornton; Great Grandfather of Riley Rogers; Dear Brother of Roger (Sandy) Thornton, Karen (the late Gerald) Anderson; Fond Brother in Law of Darlene Thornton; numerous nieces, nephews and many friends also survive. Gary was preceded in death by his parents, John and Beth (nee Salsbury) Thornton, his wife, Linda; two brothers, Todd Thornton and Dennis Thornton and one sister, Gail (the late Edward) Bryant. Gary retired from Caterpillar Tractor Company in Joliet, IL after many years of service and was a Veteran of the United States Army. He enjoyed the outdoors and was an avid fisherman and camper. There were no strangers to Gary, only friends he hadn’t met. Known as a conversationalist he had a wonderful and unselfish interest in others. Although a longtime resident in Channahon, Gary was a part of the snowbird community in Arizona and was fond of traveling with Linda. He will be remembered as a devoted husband, father and grandfather, uncle, brother and friend. A Memorial Gathering for Gary John Thornton will be held on Wednesday, March 18, 2020 from 1:00 p.m. until time of service at 3:00 p.m at The Maple Funeral Home, 24300 S Ford Rd, Channahon, IL Cremation Rites have been accorded. For more information, please phone 815. 467-1234 or visit his Memorial Tribute at www.themaplefuneralhome.com Memorial visitation is cancelled till further notice.

The family of Gary J. Thornton created this Life Tributes page to make it easy to share your memories.

Send flowers to the Thornton family.