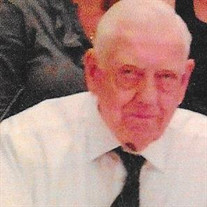 Delmar O. Peterson Delmar O. Peterson was born the son of Albert Peterson and Ruby (nee Hoversten) Peterson on August 16, 1927, in Iowa Falls, Iowa, and passed away peacefully on Wednesday, July 1, 2015 at his late Channahon residence at the age of 87 years. Beloved Husband of the late Rosemary (nee Hagan) Peterson; Loving Father of James Peterson and wife, Robin of Tennessee, Marie Maples of Alabama and Susan Paul and husband, Edward of Channahon; Proud Grandfather of Chad Peterson and wife, Pam, Shannon Henderson and husband, Michael, Amy Cook and husband, Cory, Rodney Wendell, Stephanie Gregoles and husband, Jesse, Stephen Peterson, Amanda Paul and fiance’ Dustin, Jacob Paul, James Peterson and wife, Lauren and Josh Peterson. 16 Great Grandchildren also left to cherish his memory. He was preceded in death by his parents; his wife, Rosemary (1992); His son, Stephen (2014) and one sister Darlene Peterson (1952). Delmar was a distinguished Veteran of the United States Army and a retiree of Caterpillar Inc, Joliet after 26 years of serving as an Inspector at the company. He was a skilled craftsman and woodworker who built custom furniture free hand for his family. He enjoyed bowing and billiards. He was a loving and devoted husband, father, grandfather and friend. "You are not forgotten, loved one. Nor will you ever be. As long as life and memory last we will remember thee.” A special thank you to the Doctors and Staff at the DaVita Dialysis Center for all of their encouragement and support over these past months. Funeral Service for Delmar O. Peterson will begin at 7:00 PM on Monday, July 6, 2015 at The Maple Funeral Home located at 24300 W. Ford Rd., Channahon. Interment Private. Preferred Memorials may be directed to the National Kidney Foundation of Illinois. Visitation will be on Monday from 4:00 PM until the time of service. For Information www.themaplefuneralhome.com

Delmar O. Peterson Delmar O. Peterson was born the son of Albert Peterson and Ruby (nee Hoversten) Peterson on August 16, 1927, in Iowa Falls, Iowa, and passed away peacefully on Wednesday, July 1, 2015 at his late Channahon residence at the... View Obituary & Service Information

The family of Delmar O. Peterson created this Life Tributes page to make it easy to share your memories.

Send flowers to the Peterson family.