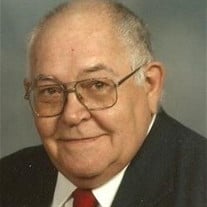 Clifford L. Gresham Clifford L. Gresham was born the son of the late Crofton Clifford and Mary Lee (nee Douglas) Gresham on October 21, 1937, in East Peoria, IL and passed away peacefully on Thursday, June 25, 2015 at Park Pointe Health Care and Rehabilitation, Morris at the age of 77 years. He was united in marriage April 26, 1959 to Carol “Sue” (nee Gellerman), who preceded him in death on July 5, 2011. To this blessed union of 52 years Clifford leaves to cherish his memory three daughters, Tonya Faw, Lora McClintock and husband Kevin and Sherrie (the late Marshall) Watts; proud grandfather of 6 and great grandfather of 5; dear brother of Marion “Jack” Burgess Gresham and wife Margene and Rose (the late Loyd) Wenger; also surviving are several nieces, nephews and many dear friends. Clifford was preceded in death by his parents; beloved wife, Carolyn “Sue”, his sister, Louise Birks; his brother, Jerry Gresham and his grandson, Christopher Emerson. Having been a resident of the Minooka/ Channahon community since 1962 Clifford leaves a treasure of many fond memories. He retired as an engineer from Caterpillar, Inc. in 1998 after 40+ years of service. He was a member of the Caterpillar Campers Club and United Methodist Church in Channahon. A DIY “shade tree mechanic” Clifford had a knack for being cleverly inventive and resourceful. He enjoyed fishing and traveled across the United States visiting all 50 states as well as Canada and Mexico by camper. Yet his greatest joy was his family. A gentle man, a loving husband, father, grandfather and dear friend is how Clifford will be much remembered and much missed. Clifford L. Gresham will be lying in state from 10:00 AM until Services begin at 11:00 AM on Tuesday, June 30, 2015 at the Channahon United Methodist Church Located at 24751 W Eames (Rt. 6). Interment Willard Grove Cemetery, Channahon. Preferred Memorials may be directed to UMCC. Visitation will be Monday, June 29, 2015 from 4:00 to 8:00 PM at The Maple Funeral Home located at 24300 W. Ford Rd., Channahon. For information www.themaplefuneralhome.com

The family of Clifford L. Gresham created this Life Tributes page to make it easy to share your memories.

Send flowers to the Gresham family.