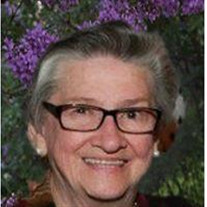 After an extended battle with cancer, Bonelyn (Bonnie) James Moss (80 years old) was “Heaven Bound” on the 29th day of May, 2015 at The Joliet Community Hospice Home. She leaves behind her children, John (Carmel), William (Brenda), Chet (Cindy) and JoDonna Gautschy (Phil); her grand kids; Sara (Miguel) {Tommy} Barone, Steve (Erin) {Loreli and Ginny} Moss; Jenny Moss (Marty Nessel) {Gwen & Gabby}; Jeff (Randi) Moss; Doug: Scott (Laura) {Camden} Moss; and Tracy Moss. She will also be missed by sister-in-law Hazel Peterson, Nieces and Nephews as well as many beloved friends. Bonnie kept fighting to stay around, her sense of humor and Christian beliefs were an inspiration to many. Bonnie was known as the “Angel Lady”; handy out over 3300 glass beads with painted angels. Bonnie was a paid comedian and would put her pain aside to make someone else happy. The Celebration of Bonnie’s Life service will be held at 11am on Saturday, the 20th day of June, at Minooka United Methodist Church (MUMC). Pastor Sarah Hong of MUMC will be officiating. Bonnie wanted an uplifting inspirational service, followed by a catered lunch reception. There will be no viewing, she was taken to The Maple Funeral Home & Crematory in Channahon after a short blessing with family members surrounding her bed. Bonelyn Merle James was born in Madison, Illinois on the 19th day of November.  She worked as a dressmaker shop assistant to make money for college (SIU). The first weekend at SIU, while getting a drink of water, she looked up and saw a handsome 6’6” young man; Jack R. Moss. They were married a few months later and were married for 54 years. They were both active in their children’s and grandchildren’s lives. Both were seen at every football, wrestling, basketball, volleyball, and track meet. Bonnie was a full time mother as well as a Real Estate Broker in the Joliet area.  Her love of sewing continued throughout her life time, she was active in quilting leagues making blankets for needy children overseas. Bonnie was quite active in making costumes and whatever else was needed for the Joliet Drama Guild. She never hesitated, and never said no when someone was in need. After moving to Minooka, she became a member of the Minooka Widow Lunch Bunch Ladies, and the Pride of the Prairie Guild, as well as the Minooka Art League. Bonnie also became a member of the St. John’s Lutheran Women’s circle and woman’s retreat group. Bonnie is preceded in death by her husband; Jack R. Moss parents; George and Ora James; her siblings, Johnnie, Bill, Tommy and Emma; as well as numerous family members. In lieu of flowers, memorial donations to your local church and JOHA would be appreciative. The family of Bonelyn J. Moss wishes to thank The Joliet Community Hospice Home for their gracious attention and care during the past month. Please send an email to HYPERLINK "mailto:[email protected]" [email protected] if able to

After an extended battle with cancer, Bonelyn (Bonnie) James Moss (80 years old) was &#8220;Heaven Bound&#8221; on the 29th day of May, 2015 at The Joliet Community Hospice Home. She leaves behind her children, John (Carmel), William (Brenda),... View Obituary & Service Information

The family of Bonelyn J. Moss created this Life Tributes page to make it easy to share your memories.

After an extended battle with cancer, Bonelyn (Bonnie) James...

Send flowers to the Moss family.