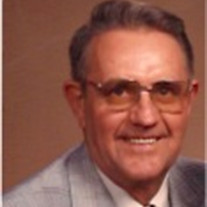 Arthur C. Johnson Of Channahon, passed away peacefully at his home on Sunday, April 20, 2014. Born the son of Conrad and Louise Johnson (nee Snodgrass) on August 20, 1931 in Joliet, IL. Arthur was united in marriage on December 30, 1952 to his childhood sweet heart Charlene (nee Hulbert). To this blessed union of 61 years he was the loving father of Janet (Gary) Fitzgerald; cherished grandfather of Lindsay Fitzgerald, Kathleen Fitzgerald-Ellis and husband Trenton and Kevin (Heather Ulivi) Fitzgerald; dearly loved brother of Dorothy (the late Chuck) Ziesemer, and Donald (the late Joy) Johnson; fond brother in law of Clinton (Beverly) Hulbert, Betty Voytko and Chuck (the late Theresa) Crawford as well as numerous nieces, nephews and many dear and treasured friends. Preceded in death by his parents, step mother Mabel Johnson, sisters in law Joy Johnson, Theresa Crawford and Dorothy Hulbert, brothers in law Chuck Ziesemer, Buddy Hulbert and Raymond Hulbert. Art was a distinguished Veteran of the United States Army proudly serving his country from January 1952 to December of 1953 during the Korean Conflict. He was employed for Joliet Wrought Washer Works for many years, Lamping Trucking for 26 years and the Channahon School District for 20 years. He was a life long Chicago Cubs fan and a John Wayne enthusiast. Each morning Art looked forward to the time he spent with friends at McDonalds. To him a friend was one of the nicest things you could have and one of the best things he could be. A special thank you to Doctor Jason Jung-Gon Suh and his staff for their special care and attention when it was needed most. Arthur C. Johnson will be lying in state on Friday, April 25, 2014 from 9:00 am until services begin at 10:00 am at Resurrection Lutheran Church, located at 25050 W. Eames (Rt. 6) Channahon. Pastor Ben Ingelson officiating. Interment private. For those wishing to leave lasting memorials the Johnson Family asks that you please consider donations to Resurrection Lutheran Church or JOHA. Visitation Thursday, April 24, 2014 from 3:00 to 8:00 pm at The Maple Funeral Home located at 24300 W. Ford Rd., Channahon. For information www.themaplefuneralhome.com or 815. 467-1234

Arthur C. Johnson Of Channahon, passed away peacefully at his home on Sunday, April 20, 2014. Born the son of Conrad and Louise Johnson (nee Snodgrass) on August 20, 1931 in Joliet, IL. Arthur was united in marriage on December 30, 1952... View Obituary & Service Information

The family of Arthur C. Johnson created this Life Tributes page to make it easy to share your memories.

Arthur C. Johnson
Of Channahon, passed away peacefully at his...

Send flowers to the Johnson family.