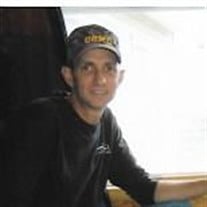 Arthur P. Hunter Jr. Arthur P. HunterJr., born the son of Arthur P. HunterSr., Linda (nee Thompson) Hunter on July 10, 1969 in Joliet, IL and departed this life surrounded by family on Sunday, April 16, 2017, at his home in Channahon, IL at The age of 47 years. He is survived by his wife, Michelle (nee Morrison) Hunter; his son, Sawyer; his mother and father; his sister, Christina; two nieces, Destine Hunter-Weeks and husband Drew and Kendra Hunter; and father and mother in law, Colston and Patricia Morrison. Arthur was a long time employee of Doors by Russ where he was a skilled and accurate Garage Door Installer. He attended school in Minooka, and was the dedicated owner of his canine companions, Shadow and Luna. He enjoyed playing Disc Golf and Woodworking in his garage. And was more than eager and happy to play video games with his son, Sawyer. Having been deeply devoted to his family, he will be remembered as a loving husband, father, son, brother, uncle as well as, a loyal friend and neighbor. He will be missed very much by those whose lives he blessed. Visitation for Arthur P. Hunter, Jr. will be held on Wednesday, April 19, 2017 from 2:00 PM until 7:00 PM at The Maple Funeral Home located at 24300 W. Ford Rd., Channahon. Interment Private. In lieu of flowers donations may be directed to The Hunter Family for later disbursement. For information 815. 467-1234 or www.themaplefuneralhome.com

The family of Arthur Hunter created this Life Tributes page to make it easy to share your memories.

Send flowers to the Hunter family.